A few months ago, I told my friends that if Elon Musk bought Twitter, he wouldn’t actually fix it the way people wanted. That’s because what people wanted was a completely unmoderated utopia (or dystopia) for people to say whatever they wanted and for Elon to bring all of the banned accounts like Donald Trump and Andrew Tate back. Since then, he’s tried to back out of the deal, got sued by Twitter and settled the suit by effectively saying “if I buy it, will you stop suing me?” (Not a real quote) He was going to lose and effectively buy the site anyway and probably pay some extra penalties as well.

On Oct. 26, the day before the deal was official, Musk went to Twitter HQ with a sink, filmed it and tweeted it. Now it’s been about three weeks since he took over Twitter and what’s happened since then? Well, not only did he not immediately reinstate all the banned accounts, which really set off Lavern Spicer, he said he was forming a “content moderation council with widely diverse viewpoints” and that “no major content decisions or account reinstatements will happen before that council convenes.” He added that this group would include the civil rights community and groups that face “hate-fueled violence.” Also on day one, he tweeted a post captioned “Dear Twitter Advertisers” and included two screenshots of text, trying to reaffirm to them that the site won’t become a free-for-all hellscape where anything can be said with no consequences. This is what I predicted would happen, because he must appease the people who pay the bills, at least in the short term, while he figures out another revenue stream.

One thing I didn’t predict is that his purchase of Twitter would cause much of a trainwreck this quickly. First off, a bunch of advertisers left, and Musk had a fit, claiming that they were “trying to destroy free speech in America,” and threatened to name and shame them if they didn’t stop. Yes, advertisers will definitely spend money if you threaten them. Good plan! He admits the site experienced a massive drop in revenue, which means he needs another way to make money. The solution? Well, Elon Musk, the richest man on Earth who hangs out on yachts for fun, decides blue checkmarks are too elitist and wants everyone who isn’t a celebrity, politician or important person of note to have a blue check next to their name. So, he tweaks Twitter Blue, a product that already existed. You can’t make this up. He originally said that it would cost $20 a month. Stephen King made a comment saying he would never pay $20, saying that the site should pay him. Elon responded with a suggestion to charge $8 instead of $20. I imagine Elon considers Stephen King a personal hero. After all, the guy wrote a book about a self-driving car that kills people and Elon Musk has made that a reality!

So, $8 is where it ends up, and Musk’s rationale is that “it is the only way to defeat the bots & trolls.” Yes, trolls could never find a use for being able to have a verified checkmark next to their name, right? Many people started making a bunch of Elon Musk impersonation accounts, with many of the users already being verified.

Rich Sommer, who plays Harry Crane on Mad Men, changed his name and profile picture to Musk’s and sent out a tweet mocking the Tesla CEO. 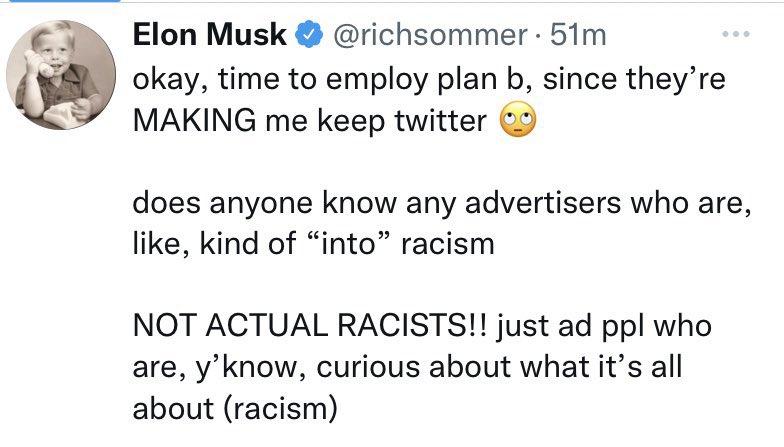 to Elon Musk and shitposting.

to Elon Musk and shitposting.

Then there were the people who did start buying blue checkmarks just to make posts. Here are some of my favorites:

Here’s one for the Canadians:

And in perhaps the most damaging use of $8 ever, someone impersonating pharmaceutical company Eli Lilly and Company tweeted this: 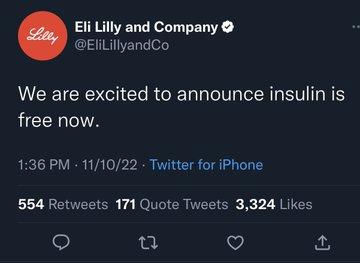 When the real Eli Lilly and Company tweeted an apology, people started mocking them for not apologizing for the cost of insulin. If that wasn’t enough, their stock dropped rapidly. There’s lots of speculation as to how this could happen, but the fact is that right after the tweet, the stock had a $20/share drop. That’s a lot in one day. A few days later, the Twitter Blue program got suspended, and you didn’t need a Nostradamus to see this coming. This raises an interesting question: could Eli Lilly sue Twitter for allowing this to happen? Probably not, but it does lead to why verification exists in the first place. It’s a bizarre story that involves baseball manager Tony La Russa, who tried to sue Twitter back in 2009 because someone was impersonating him. La Russa claimed they settled, but Twitter denied this. As a measure to fight this impersonation problem, Twitter put a Verified feature in place for famous people. You were required to send someone a scan of your ID to get it. That is how verification should work. Just letting anyone buy a blue checkmark with no real verification was absolutely going to result in this.

An email from Elon leaked onto the site, where he mentioned that 50% of the revenue still needs to come from advertisers, even if Twitter Blue worked. He also told his staff that Twitter might not survive the upcoming economic downturn, he’s already teasing an impending bankruptcy. Here’s the problem: he doesn’t know how to run a business that’s funded by advertising and subscriptions. He only knows how to run businesses that are allegedly heavily funded by government grants and subsidies. Elon has declared that “comedy is legal” on Twitter, but this opens another potential problem that he needs to avoid. Straining relationships with Visa, Mastercard, his old friends at PayPal and other payment processors. This is because I guarantee that once the fake accounts are banned, the owners of them will issue chargebacks against Twitter. This isn’t the first time this happened, the payment processors almost stopped dealing with OnlyFans and one of the reasons was chargebacks, as they feared credit card companies would stop working with them. Visa doesn’t need Twitter, Twitter needs Visa. On Nov. 16, he sent an email to his remaining staff, telling them to pledge their lives to the company or resign. Guess what most of them did? The next day, TwitterHQ shut down because Elon was afraid of the service being sabotaged by the service and that the offices would reopen on the 21st, giving Elon a weekend to figure out if he has any staff left and who among that staff he can trust. This all sounds awfully familiar. I don’t want to say a certain someone’s name, but…isolating from everyone and not knowing who you can trust at the very end is very similar to how things wrapped up in 1945.

Elon once again proved me right on Nov. 18, when he tweeted, “New Twitter policy is freedom of speech, but not freedom of reach. Negative/hate tweets will be max deboosted & demonetized, so no ads or other revenue to Twitter.” He’ll effectively be shadow banning posts deemed “negative” or “hate,” they won’t appear in feeds, they are only accessible through a person’s Twitter page directly to see them, which many people don’t do. He did reinstate the accounts of Christian conservative satire site The Babylon Bee, Canadian psychologist Jordan Peterson and I guess for “balance, ”Kathy Griffin. He gave a hard “no” to Alex Jones, so it seems the “free speech absolutist” has his absolutes. Former president Donald Trump got his account reinstated after a poll created by Elon that was about 52/48 in Trump’s favor. Trump has repeatedly stated he won’t be coming back to Twitter, so we’ll see how long that will last or whether a post will be “deboosted” under the site’s new rules.