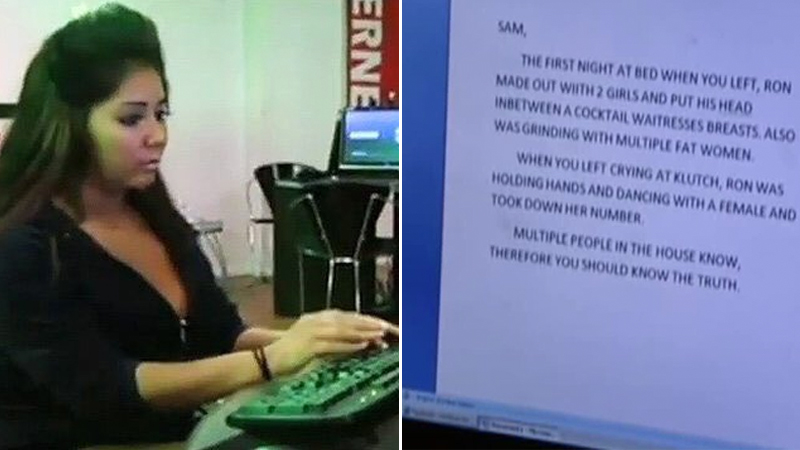 I love The Jersey Shore and I wish I could experience the letter from season two in my own life, me being like Pauly D. I would like to be aware, but not involved in the drama, just watching it from afar. The letter itself is iconic with it being written in ALL CAPS, direct and taking no prisoners, I can only say that it is truly an iconic piece of literature.

It’s so iconic because of who wrote it and the absolute chaos that ensued. Snooki and Jenni wrote the letter in an internet cafe after their shift at work. It is truly a girl power moment as well as detrimental to feminism due to the women looking out for their friend and Sammi completely reacting in support of her cheating, lying, abusive boyfriend RON. Ron deserves no rights and I don’t know why I thought they were similar to Kourtney Kardashian and Scott Disick soulmate energy. THEY ARE NOT. Both are toxic for the other and did some pretty horrible things to one another throughout the relationship, Ron was way worse though, just watch the second season of The Jersey Shore.

In my life I aspire to be involved in my own version of the beloved reality TV show, but it will be almost as good as the original and not like other shows that have tried to replicate it. How will mine be different? IDK, but that’s MTV’s job to figure that out for I am busy, currently, working on memorizing the letter for personal reasons.

THE FIRST NIGHT AT BED WHEN YOU LEFT, RON MADE OUT WITH 2 GIRLS AND PUT HIS HEAD IN BETWEEN A COCKTAIL WAITRESSES BREASTS. ALSO WAS GRINDING WITH MULTIPLE FAT (we don’t agree with the fat shaming but it is in the letter) WOMEN.

WHEN YOU LEFT CRYING AT KLUTCH, RON WAS HOLDING HANDS AND DANCING WITH A FEMALE AND TOOK DOWN HER NUMBER.

MULTIPLE PEOPLE IN THE HOUSE KNOW, THEREFORE YOU SHOULD KNOW THE TRUTH.