Okay it’s definitely not that bad, but I am reminded far too often how it’s a dog eat dog world and I’m wearing milkbone underwear when I expose myself as an Android user. Everywhere I look on La Salle’s campus I see people on their iPhone, with their AirPods in and using Apple music, and what do I do? Nothing. I do nothing because I am respectful and understand that it’s just a phone, it really does not matter. But, the moment someone asks to AirDrop something to me, or God forbid I turn an iMessage group chat green, I am targeted and chastised like I’m the problem. 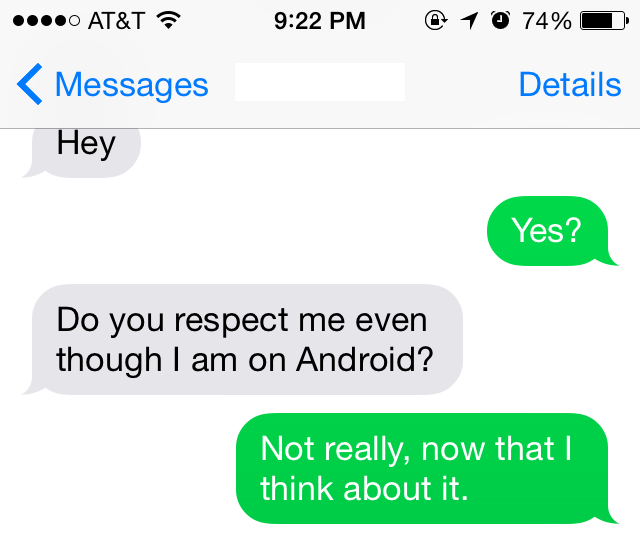 Wake up, people. It’s not me that you should be targeting, I just sit here with my Galaxy S9+, talking to Bixby, customizing my home screens with all the freedom in the world, while Apple users didn’t even get the freedom to add widgets until iOS 14. Apple is an extremely predatory company. They lock you in early by acquiring good deals with the popular wireless plans they know will have teenagers and their parents on them like Verizon or AT&T, and once you’re in, good luck getting out.

Take into consideration that your Apple ID literally contains your entire life. All of the photos you’ve ever taken, all of your contacts, wireless payments, passwords, facial scans, personal data, analytics and so much more. What happens if you try to take all of that out of the Apple ecosystem? Well, for some things like pictures and contacts it is doable, but Apple makes the process as difficult as possible by forcing users to either hard transfer everything from the phone to a computer or to another phone slowly, or by downloading a replacement app like Google Photos and backing everything up manually. Lots of other things, though, are almost entirely locked behind Apple’s ecosystem. For example, all of the apps and in-app purchases made since you got “Angry Birds” when you were twelve until now will not transfer over. Some of them you can replace, but a lot of your digital footprint will be completely uprooted.

I won’t get into the actual politics and ethics of Apple’s production, as I am certain that companies like Samsung and Google are just as bad in other or even worse ways. But come on. Can we talk about how everyone found out last year that Apple uses planned obsolescence in the creation of their batteries and Apple users just said “cool,” and then bought an iPhone 12 Pro? I’m not shilling for the Google Pixel because it’s better than the iPhone, I’m shilling because people deserve to be treated better by the company that basically rules their whole life at this point.

You deserve better than to pay hundreds of dollars every year for a slightly better camera to a company that keeps you in a loop of constant disappointment, predatory technology practices and that is looking more and more every day to be like the villain from a shockingly familiar episode of “Black Mirror.” I just ask that before you go and buy into the iPhone 14,000,000 when it drops next month, just take some time to think about why you love Apple so much and if you really do, or if you just feel like you have to.