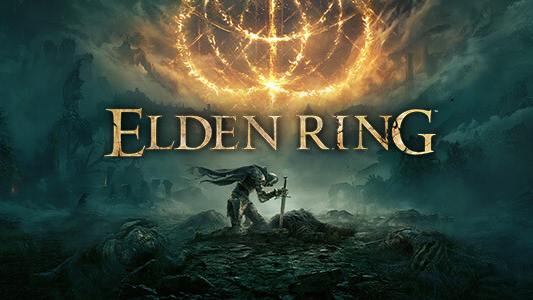 “Elden Ring” has been the obsession of many on the internet since it was revealed in 2019, but for me, it has been an obsession for about two weeks.

“Elden Ring” is a Hidetaka Miyazaki joint co-created with “Game of Thrones” writer George R. R. Martin. The latter you might know as the writer of the book series “A Song of Ice and Fire” which was adapted into the juggernaut HBO series. Martin was also heavily involved in the creation of the series as a producer and story consultant, and is hailed for his worldbuilding and character development… although maybe people give him a pass on the last few seasons of “GoT” because he wasn’t as heavily involved.

The former, however, is a visionary known to many, but not nearly to the degree as Martin. Miyazaki is the auteur behind the “Dark Souls” series of games, as well as “Demon’s Souls,” “Bloodborne” and 2019’s game of the year winner “Sekiro,” all of which have scored incredibly high with critics and have gathered large followings due to their punishing difficulty, unique game and level design and obtuse, well crafted stories. While “Dark Souls” is ubiquitous with difficulty in the gaming community, outside of its core audience, many people do not realize that people don’t like it because they’re gluttons for punishment, but because the games are completely unique in the way you interact with them, and Miyazaki is the creative director behind it all.

“I doubt you could even imagine it.”

So, Martin and Miyazaki unsurprisingly worked together to make an immaculate world with intrigue around every corner. But, none of that matters if it isn’t fun. “Elden Ring” is by all accounts, an open-world action RPG, but it would be more apt to call it “Souls-like,” as in the gameplay involves you running head first into handcrafted encounters with multiple enemies entirely more powerful than you leading up to a boss (usually of the giant monstrous variety) who will kick the sh*t out of you over and over. You lose, you die, you suffer, repeat. And I love it.

Each time you clear an encounter, you move on, not only with the game’s currency: runes, which can be used to make yourself more powerful and prepared to fight, but also with the knowledge of how to clear that area and the satisfaction that you figured it out. If you die, you can return to the spot you failed to pick up your lost currency, but if you fail again before reaching them, you’re back to your last checkpoint having made no progress.

Giant enemies are always scary, but sometimes it’s the small ones that give you the most trouble.

At the time of writing this, I have played “Elden Ring” for more than 60 hours and I have died over 500 times, most of which were from throwing myself at a boss until I figured out their patterns and was able to perfectly squeak out a victory. While seeing my character level up and become more bad*ss over time is a reward in itself, really a lot of the fun I’ve had playing “Elden Ring” comes from the satisfaction and happiness I get from learning and growing as a player, not necessarily as a character in the world, which is the same reason Miyazaki’s 2015 creation “Bloodborne” got me through the pandemic semester without going insane.

With a magical samurai sword in one hand and a staff that shoots lightning bolts in the other, I’ve never been so proud to be a nerd.

My character stands victorious after taking down a warlord in a hellish, war torn desert.

The story places you, an exiled “Tarnished” in a world torn apart by war over pieces of a Tolkien-esque magical artifact known as the Elden Ring that can control basically everything and grant the user limitless power. As a Tarnished, the story is one of a lowly underdog working his way up through increasingly more powerful enemies to eventually claim the ring and become the Elden Lord, punishing those who exiled their kind for decades. The story is incredibly well written and detailed, and Martin’s worldbuilding comes in spades. But, it is up to the player to interact with the story by exploring and reading into the lore rather than just telling you through cutscenes or menus, which makes it much more rewarding to learn about what’s truly going on and what factions you’ll side with.

“The fallen leaves tell a story, across the fog, the Lands Between.”

Torrent, the horned horse of “Elden Ring” quickly becomes a companion in a world full of hate.

I’m not a big fan of high fantasy, part of the reason why I never finished “Game of Thrones,” and why I was never a big fan of “Lord of the Rings” or aptly, “Dark Souls.” But, something about the vibe and setting of “Elden Ring” sparked my interest. Instead of everything being dark, brown and depressing, the world of “Elden Ring,” the Lands Between is bathed in bright colors, giant glowing trees, deep scarlet red swamps, sun bathed forests and crystal lit caves. I’ve never been one for the knights and dragons motifs, but when everything looks like this, and the dragon dive bombs me from the sunset sky I can’t help but be impressed.

All of Miyazaki’s creations are revered for their large worlds and interconnected maps, but oh my lord, this map is absolutely huge. Pictured left is the portion of the map I spent the first 20 hours of the game exploring, and pictured right is the entirety of the map, a majority of which I have yet to even see. 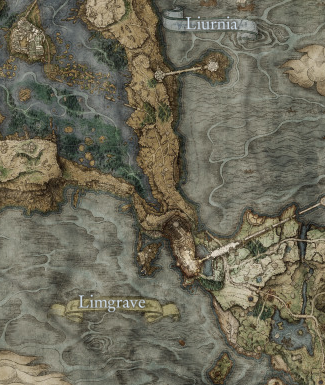 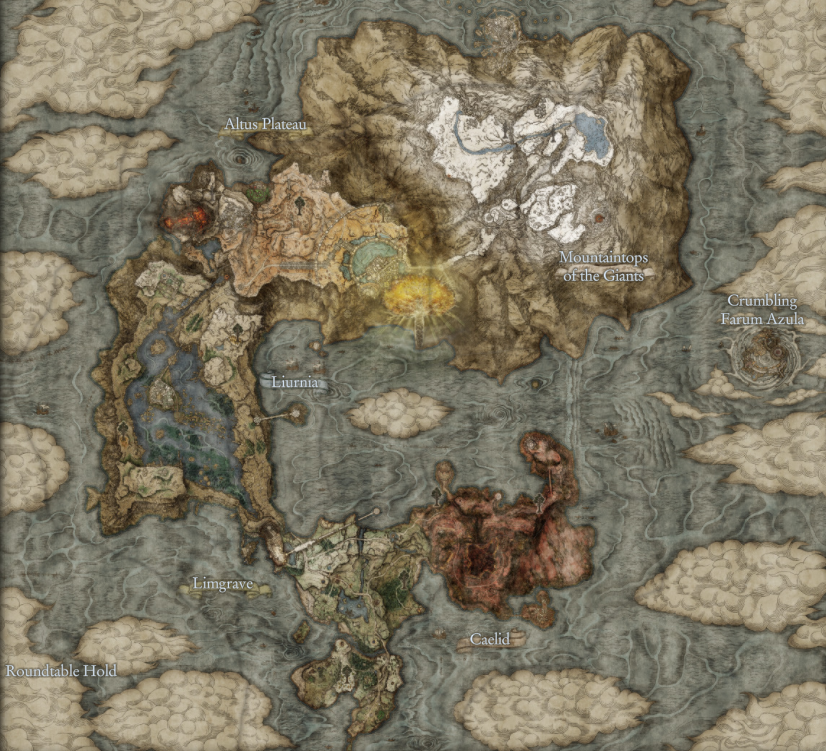 The Lands Between are twice as large as “Skyrim” and are about two square miles larger than “GTA V.”

Not to mention that the entire map has a system of underground caves, lakes and cities…

I will never finish exploring the Lands Between, and that’s okay. My favorite moments in “Elden Ring” have just been riding my horse around exploring and taking in the world that was crafted inch by inch to be filled with story, set pieces and cool interactions. If I see a random smoke signal, there’s probably a camp. If I see a mountain, there’s probably a giant cave system inside.

There’s nothing like walking along in a major walled city, taking a look at all of the shops and homes when out of nowhere intense music starts playing, a giant health bar appears at the bottom of my screen and an eldritch horror, the likes of which Lovecraft only dreamed of, claws its way out of the ground into the streets. Every single location on this gigantic map just makes you appreciate how much thought, care and pure fun went into the creation of “Elden Ring.”

I’ll level with you. Since I got my hands on “Elden Ring,” my productivity has hit rock bottom;I spent most of my free time over spring break hunched over, eyes burning, being the quintessential mom’s basement geek playing “Elden Ring,” it’s bad. This is my game of the year so far, and it’s one of the best I have ever played.

Every time I think I’m getting close to the end, another five hour adventure falls into my lap, and every time I think I’m about to get bored, one of the coolest things ever happens, like a man using a dragon’s head as an arm to eviscerate me or finding a random treasure chest that rewards me by teleporting my character to actual hell.

The bosses in “Elden Ring” are incredibly difficult by design, which turns some people off to the game.

But, its issues are still incredibly noticeable and distracting, and while I don’t think they take away from the experience explicitly, they do really make me disappointed that the developers can’t just bring themselves up to 2022 standards for certain things like accessibility, player choice and respect for time.

First off: there is no pause button. You are either playing “Elden Ring” or you are not. I found myself wanting to take small breaks between work to play for 10 or 15 minutes, but it was about five minutes of setup each time because I couldn’t just pause the game, I’d have to completely exit out each time. People defend this decision by saying that feeling immersed in the world with no distractions is part of the artist’s creation, but that’s completely derisive to me and I’m sure many others. People can’t always dedicate mass amounts of time to a game, and people should be able to experience it how they can.

On that theme, there are next to zero accessibility options in “Elden Ring,” subtitle size is small for the visually impaired, there are no closed captions for the hearing impaired and most of all, there are no difficulty options. Every time a “Soulslike” comes out, there is a debate about why they have to be so hard or so punishing so that some people are not able to experience the story or talk about it with their friends to which many respond that the difficulty is part of the overall experience you get while playing, and to make it easier would take away from its themes and the satisfaction of winning.

To that I say, you are wrong and naive, and I 100-percented “Bloodborne” and killed two of “Elden Ring’s” main bosses on my first try. I don’t want these games to be easier, although I do admit the balance can be off at times, but there are so many people I’m talking to who are interested in “Elden Ring,” because of the world, the critic reviews or Martin’s involvement that simply won’t touch it because they know they won’t have any fun playing it. That is a shame. Let people tailor their experience to how they want to play. The perception of art is subjective and video games are art. Do better.

“The Elden Ring, that which commanded the stars.”

I cannot recommend “Elden Ring” to you unless you’re incredibly committed to learning and being beat down over and over. But, if you’re open to the challenge, and want to learn more about the incredibly detailed world crafted in the Lands Between, I’d say go for it. It is an excellent entrypoint to the “Soulslike” genre as it has many quality of life improvements that make it easier on newcomers, and the visuals, while not amazing, are still beautiful and compelling for those who like a great artistic depiction of a fictional world. If you’re a “Souls” veteran, this is a no brainer. I will continue playing “Elden Ring” likely until I keel over from playing too much and maybe, just maybe, one day I’ll actually beat the game.

“Elden Ring” is a 9/10 for me, and I can’t wait for other people to experience it as well.